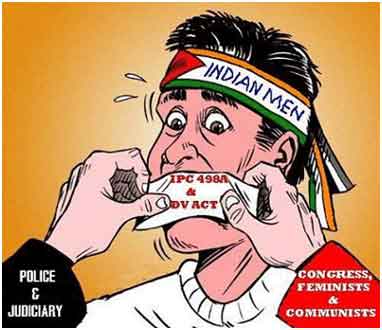 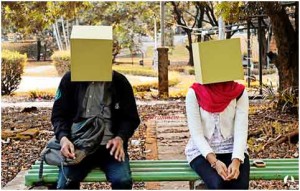 Rajni got married to Akhil in 2002. They both are from lower middle class families in a small town in UP. It was difficult to make ends meet with Akhil’s meager income as a tailor and there were constant fights among the two because of this. Akhil started despising to go home after work and started looking for excuses to stay away from his wife, who got infuriated further due to his conduct. One day when he went home particularly late, he saw his little daughter crying. His mother told him that his wife beat them up whenever she is in bad mood and also makes her do all the household work. When he confronted his wife about this, his wife left his home crying that he will be sorry. He was distraught but he also used those few days’ peace to work and even started entertaining thoughts of expanding his business.

One week later police came to his shop and told him that his wife has filed an FIR against him for cruelty and harassment. He could not convince them that neither he nor his mother ever hit his wife; instead his mother was ill treated by Rajni. He was put in jail and he had to remain there for eight months before he was let out by the court as he had no money for bail or a good lawyer. His mother, who had to stay in Jail for a week, seemed to have aged a decade more in this period. His wife had also filed for divorce during this period. He now worries whole day as to how will he provide maintenance to his ex-wife and pay for education of his child whom she doesn’t want to raise.

This is a situation in many households of India these days. There are two extremes of society; one which is majority is where women are not treated with respect and dignity in a household, where birth of a girl child is not considered good omen sometimes leading to female feticide or infanticide; and still there are other women, although perhaps in minority,who misuse the power given to them by the systemand they are not shy to use unfair means for getting even in a personal vendetta.

Let’s take a look at the laws that give enormous power to women – where their word is enough to put someone behind bars.

This section says that if husband or relative of a husband of a woman subject her to cruelty, they shall be imprisoned for a term up to three years and shall also be liable for fine. This provision was added to the Indian Penal Code in 1983 to protect women from cruelty by her husband and his family.The term cruelty has a wide scope so that the perpetrators are not let free due to insufficient protection of the law.There are many cases where courts have observed that the complaints by the victims are false and are made for some personal reasons.

What can be cruelty?

Cruelty, that is a criterion for penalty under IPC Section 498A, means harassment of a woman with a view to force her or any related persons to meet any unlawful demand for any property or any valuable security. Cruelty can be:

Cruelty can be as vague as cruelty due to deprivation. Inability to provide for basic needs (irrespective of the fact that the condition is same for the family) or false allegations are also a few types of cases that can come under this law.

This offence is non bailable, that means a person might get caught off guard on a false complain and then there’s a chance of loss to his job as well. The offence is also non compoundable, which means that if later the woman changes her mind, and wants to reconcile, the case will still go on in the court because such crime is against the society at large.

There have been many reports of false cases by use of this section. In the case of Sushil Kumar Sharma v. Union of India and others, the Supreme Court of India agreed with the view that there are cases where the provisions of the law are being misused and expressed the desire that legislature should consider making provisions to stop this menace.

The Supreme Court observed, “But by misuse of the provision a new legal terrorism can be unleashed. The provision is intended to be used a shield and not assassins’ weapon. If cry of “wolf” is made too often as a prank assistance and protection may not be available when the actual “wolf” appears. There is no question of investigating agency and Courts casually dealing with the allegations.” 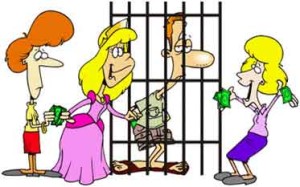 The court also said, “It is to be noted that the role of the investigating agencies and the courts is that of watch dog and not of a bloodhound. It should be their effort to see that in innocent person is not made to suffer on account of unfounded, baseless and malicious allegations.”

The Protection of Women from Domestic Violence Act, 2005

Section 3 of the PWDVA defines domestic violence as “any act, omission or commission or conduct” that:

(a) Harms or injures or endangers the health, safety, life, limb or well-being, whether mental or physical, of the aggrieved person or tends to do so and includes causing physical abuse, sexual abuse, verbal and emotional abuse and economic abuse; or

(b) Harasses, harms, injures or endangers the aggrieved person with a view to coerce her or any other person related to her to meet any unlawful demand for any dowry or other property or valuable security; or

(c) Has the effect of threatening the aggrieved person or any person related to her by any conduct mentioned in clause (a) or clause (b); or

(d) Otherwise injures or causes harm, whether physical or mental, to the aggrieved person.

It defines that an aggrieved person can only be a female. Such favor towards women in the absolute sense can allow her false statement to land a person and his family in jail.  This Act assumes that men are perpetrators in cases of Domestic Violence Act. A complain by the woman is considered primarily true. 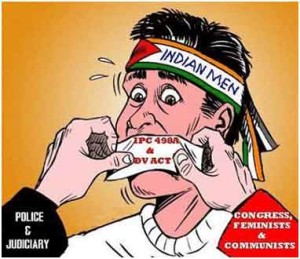 According to SAVE organization, these laws are not gender neutral and cause grave misery for the affected man. One of the major cause of such situation is broad definitions of domestic “violence” – Civil definitions of domestic violence include ill-defined and non-violent actions such as causing “annoyance,” making your partner “afraid,” and engaging in “harassment.”

In an absolutely bizarre case, a two month old toddler Zoya was granted anticipatory bail because there was a dowry harassment report filed against her family members which even implicated her name. Even if the fact that the name of baby was put in an application, there should have been some verification of the applicant. How can a complaint letter naming a two-month-old baby be blindly considered in this manner? 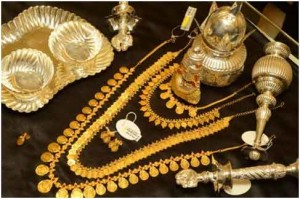 Both taking and giving dowry is illegal- picture © of The Hindu

In this Act, the Burden of proof is on the defendant and not the complainant. That means instead of the victim substantiating her complain the accused has to prove somehow that he has not committed this crime. There is an assumption of the person being guilty whereas in other type of cases victim has to prove the crime.

8-A. Burden of proof in certain cases- Where any person is prosecuted for taking or abetting the taking of any dowry under Sec. 3, or the demanding of dowry under Sec.4, the burden of proving that he had not committed an offence under those sections shall be on him.

Even after commencement of Criminal Law Amendment Act in April 2, 2013, there were still no checks on false complains. When a woman alleges rape by filing an FIR, the person who is accused is jailed. By the amended law, the crime is non bailable in nature. In March this year, there were reports of a man who committed suicide in Bhopal because he was falsely charged of this crime. He languished in jail for three months before the truth came out and he was allowed to go home. It was found out that he had lent some money to the “victim’s” husband and to avoid repayment, the wife had alleged that she was raped.

It has been reported in India Today that Delhi High Court recently observed  rape law was often misused by women as weapon for “vengeance and vendetta” to harass and blackmail their male friends by filing false cases to extort money and to force them to marry them.
“Many of the cases are being reported by those women who have consensual physical relationship with a man but when the relationship breaks due to one reason or the other, the women use the law as a weapon for vengeance and personal vendetta to extort money and sometimes even to force the boy to get married to them,” the court said in a recent order.

“There is a clear demarcation between rape and consensual sex and in cases where such controversies are involved, the court must very cautiously examine the intentions of both the individuals involved and to check if even the girl, on the other hand, is genuine or had malafide motives.” 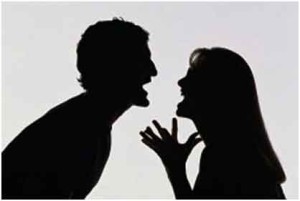 Whenever a law is made, it is made for each citizen. The special laws like these are made to help marginalized persons in finding a ground for themselves. There’s no doubt that in each of these laws, the intention is absolutely harmless. The legislature has a duty towards the society and in trying to protect the women and children, it has led to creation of legal terrorists who use these laws to blackmail or coerce or extort money from hapless grooms and their families who have no other option apart from facing jail and social discouragement or giving up under demands of these extortionists.

The need to balance personal liberty with law enforcement has been stressed in Nandini Satpathy’s case by quoting Lewis Mayers: “The paradox has been put sharply by Lewis Mayers: “To strike the balance between the needs of law enforcement on the one hand and the protection of the citizen from oppression and injustice at the hands of the law-enforcement machinery on the other is a perennial problem of statecraft. The pendulum over the years has swung to the right”.

How can such misuse be prevented?

So, the legislature also owes a duty towards these people and there is an immediate need to make the existing women laws more concrete so that only genuinely harassed women use this law. This can be through measures such as:

1. Punishment for false reports by the women.

2. In Law Commission Report no 243, it has been observed that making offence under 498A compoundable (allowing the case to drop on the instance of complainant) can help in reconciliation efforts of the couple to take place amicably.

3. Proper investigation of the reports filed by women by the police.

4. Setting up of conciliation centers which counsels the couple who is having domestic troubles.