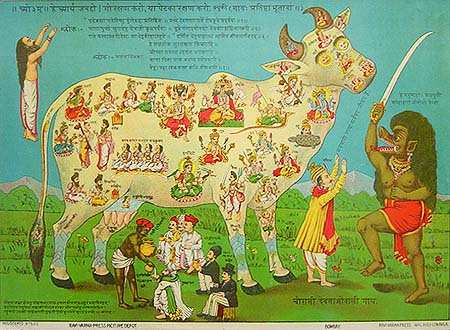 In this blogpost, Haridya Iyengar, Student, Jindal Global Law School, Haryana, writes about whether the ban on the cow slaughter is constitutionally valid or not.

The cow slaughter laws in India vary from state to state. It is important to look at the different laws set up in each state before tackling the constitutionality of the laws.

States where Cow Slaughter is Legal

Kerala, West Bengal and all Northeast state with the exception of Manipur and Assam have made no laws banning the slaughter of cows.

Bihar, Chhattisgarh, Delhi, Goa, Gujarat, Haryana, Himachal Pradesh, J&K, Jharkhand, Karnataka, Madhya Pradesh, Maharashtra, Punjab, Rajasthan, Uttar Pradesh and Uttarakhand have imposed a complete ban on cow slaughter. This includes the storage and consumption of beef. However, in Punjab and Uttar Pradesh the import of beef for consumption is not banned. In Himachal Pradesh cow slaughter for the purpose of research is legal[1].

Constitutional Support for the Ban on Cow Slaughter

The complete ban on cow slaughter is in consonance with Article 48, Article 246 (Entry no. 15 in the State list) and Article 51-A of the constitution of India.

Article 48 states that “The State shall endeavour to organise agriculture and animal husbandry on modern and scientific lines and shall, in particular, take steps for preserving and improving the breeds, and prohibiting the slaughter, of cows and calves and other milch and draught cattle.”
While this does not make it mandatory for the state to impose a complete ban on cow slaughter, it does give the state the power to do so.

Article 51-A (g) states that “It shall be the duty of every citizen of India— (g)  to protect and improve the natural environment including forests, lakes, rivers and wildlife, and to have compassion for living creatures;”.
This gives the state power to enact laws banning cow slaughter to help improve the fundamental compassion towards living creatures.

There have been many petitions filed before Supreme Court challenging the validity of the laws. Here are two of the major cases:

This case was decided by a 5 judge bench. The petitions challenged slaughter of certain cattle in three states – Uttar Pradesh, Madhya Pradesh and Bihar. The laws were challenged on three grounds:
1) the total ban offended Muslims as the sacrifice of cows was sanctioned on a certain day.
2) Such a ban violated the rights guaranteed to butchers under 19(1) (g) of the constitution.
3) That a total ban was not in the interest of the general public

The Supreme Court held that:
1) the total ban on the slaughter of cattle is valid and in consonance with the directive principles laid down under Article 48.
2) A total ban on she-buffaloes and breeding bull or working bullocks as long as they are capable of being used as milch or draught cattle was also reasonable and valid.

With respect to the first ground of the petition which mentioned that slaughter of cows is required on a certain day the court held that, “no material on the record before us which will enable us to say, in the face of the foregoing facts, that the sacrifice of a cow on that day is an obligatory overt act for a Mussalman to exhibit his religious belief and idea. In the premises, it is not possible for us to uphold this claim of the petitioners.”

However, it must be noted that the court left the question of whether “total ban” was within the scope of the restrictions placed by Article 19 (6).

This is the most important case with respect to the issue of banning cow slaughter. The petition was challenging the amendments in section 5 of the Bombay Animal Preservation, which was also applicable to the state of Gujrat. The amendments changed the ban on slaughter of bulls and bullocks under the age of 16 to a complete ban.

The petition challenged the amendment because of the belief that bull and bullocks over the age of 16 tend to become economically unbeneficial. However, the court held that “The economy of the State of Gujarat is still predominantly agricultural. In the agricultural sector, use of animals for milch, draught, breeding or agricultural purposes has great importance. It has, therefore, become necessary to emphasise preservation and protection of agricultural animals like bulls and bullocks. With the growing adoption of non-conventional energy sources like biogas plants, even the waste material has come to assume considerable value. After the cattle cease to breed or are too old to do work, they still continue to give dung for fuel, manure and biogas, and therefore, they cannot be said to be useless. The backbone of Indian agriculture is the cow and her progeny in a way. The whole structure of the Indian agriculture and its economic system is indirectly dependent on the cow.

In order to give effect to the policy of the State towards securing the principles laid down in Articles 47, 48 and clauses (b) and (c) of Article 39 of the Constitution, it was considered necessary also to impose total prohibition against slaughter of progeny of cow.”

The court also repelled all arguments on the grounds of fundamental rights under Article 14 and 19(1) (g) by stating that, “In the light of the material available in abundance before us, there is no escape from the conclusion that the protection conferred by the impugned enactment on cow progeny is needed in the interest of the nation’s economy. Merely because it may cause “inconvenience” or some “dislocation” to the butchers, restriction imposed by the impugned enactment does not cease to be in the interest of the general public. The former must yield to the latter.”

The analysis made on the provisions of the constitution and judgements of the Supreme Court shows that even the complete ban on cow slaughter is constitutionally valid.