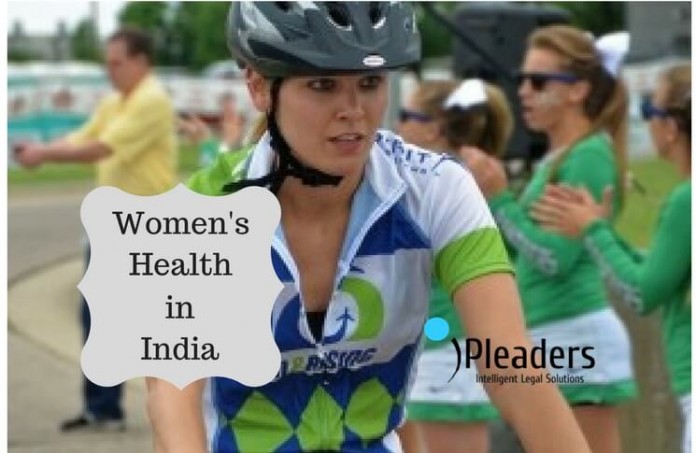 This article on “Why Women’s Health is a Huge Concern Today?” is written by Ishita Mehta.

With an increasing number of disease and illness, women’s health is degrading day by day. There is an acute need to adopt early diagnosis and early treatment for women. Poor health brings out problems not only for women but also for their families.

In this article, I am going to talk about how women have been major targets in different programs, facilities and how a women’s health is a major concern today.

This article will bring into notice the sterilization deaths in India, needs for more than just a sanitary napkins and will bring into focus the social workers who’re spreading awareness about the needs of women and girls in today’s time and their right to abortion in the context of gender equality.

The article below brings in light the major areas that need focus to create a clean and healthy atmosphere around women.

We are all well known about the sterilization deaths in Chattisgarh which happened in the year 2014.

The tragedy was the death of 14 women who lost their lives post tubectomy (process for sterilization)- led under horrendous conditions. It requires a more profound investigation. All these women underwent the operation at a family planning camp organized by the state government.

There Are Guidelines Related To The Number Of Operations And Surgeries Done, which says-

But, in this medical camp, Dr. R K Gupta performed in total of 83 surgeries with only one instrument in five hours.

India has a dark history of sterilization- targeting the poor and the unprivileged.

For decades, India has relied on female sterilization as a primary mode for contraceptive.

Prime Minister has taken a major step towards modernizing that system, by introducing-

The World Health Organization recommends their use without restriction for women of childbearing age.

Apart from these, there have been new birth control options added by the international organizations.

All these new methods are tried on women who do not know any other resource to go for private healthcare facilities.

In Chhattisgarh, many women due to lack of money traveled from their villages to get the incentive of cash worth Rs 1,400/-

There are drawbacks of sterilizations which have been admitted by the health care facilities. India’s population is increasing due to unwanted reasons and government, with respect to control of the human population, which is rapidly growing.

A more intensive take a gander at various gadgets received to push family arranging in India uncovers that, all projects are tilted against women’s health.

However, they have been publicized on TV.

The WHO additionally sets out that-

This is unreservedly promoted crosswise over TV screens in the nation.

Youthful urban young ladies take a gander at it as their flexibility to pick ‘the following morning’ pill, which was denied to them for very long.

Long term abuse as per specialists are as yet being contemplated.

Additionally, there are basic reactions like- queasiness, spewing, cerebral pain, stomach dying, unpredictable menstrual cycles. Long term impacts are as yet being contemplated.

The another contraceptive method is Intra Uterine Device which is degrading women’s health in its own way.

Women have been a major targets of all these programs, especially the women who have no knowledge of the consequences which can arise.

Intra Uterine Device is temporary in nature. These are economical contraceptives.

Women have been a major targets of all these programs, especially the women who have no knowledge of the consequences which can arise.

Only giving napkins will not solve this issue. What we need here is an initiative to render more education to rural girls about the menstrual cycle and how the body works during periods.

Only giving napkins will not solve this issue. What we need here is an initiative to-

But, the major question here is- what is the point of giving young girls sanitary napkins as there are no clean toilets?

But, the major question here is-what is the point of giving young girls sanitary napkins as there are no clean toilets?

There is a solution to all this. We need more of biodegradable, low cost pads.

There is a lot of promising and emerging development happening in India regarding this issue.

There is a lot of tribal population and the people below poverty line who are the worst affected in terms of livelihood security as well as health outcomes.

We all know that healthy mothers can ensure a better future for their children.

This also involves the knowledge about how the hospitals should run.

People in rural area believe that during pregnancy the mother should not eat more and stay limited with the food habits just because they fear that the baby would grow too big. There are a lot of myths like this that people need to be made aware about.

The two acts that regulate sex determination and abortion separately are-

The Medical termination of pregnancies(MTP) Act, 1971 says that-

The Pre conception and Prenatal techniques monitor the strategies of abortion and it has been directed against pre- birth determination and sex selection.

As per the techniques, concentrating on the supply side of dishonest and unlawful therapeutic practices would counter sexual orientation one-sided sex determination.

With sufficient care, it would help the privilege to protected and legitimate abortion for women.

There is a consistent concession to the way that is opposed to following pregnancy, i.e.

Both the laws must be actualized truly alongside all other sexual orientation benevolent laws to make it feasible for ladies and young ladies to lead an existence of fairness, nobility and agreement.

Taking birth as a women in India is a challenging thing hence, they’re facing a lot of medical issues, especially rural women, as they are not aware about the certain things that women should know about their health.

The health situation in our nation is quickly changing, both regarding the general health challenges that we confront and in addition, our reaction to these difficulties.

Around 75% of health foundation, medicinal labor, and other well-being assets are moved in urban territories where 27% of the population live.

The concentration of general health is to achieve change at the arrangement level for averting ailment as well as for the women’s health advancement and to focus on public health and promotion.

Women today are more independent and liberated than the earlier era. They have totally redefined gender roles and have proven their potential but, in the process of fighting gender equality, women’s health is at a toll.

This’s all about “Why Women’s Health Is A Huge Concern Today?” Did you find the post effective? Do write to us in the comment box below.

Don’t forget to Share the article in your network!!