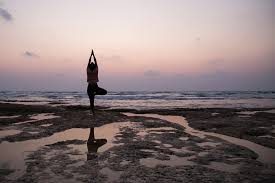 This article has been written by Namrata Kandankovi, student of Symbiosis Law School, Pune. The author of this article has discussed the importance of yoga and meditation in a law students’ life, and how would this practice further helps in a legal profession and the concept of sound of silence and has finally discussed the personal experience with respect to yoga as a part of her curriculum.

The present-day lifestyle among students’ calls for the need for yoga and meditation, and these two should indeed be placed on an upper pedestal, in order to achieve the overall development of a student. As these two play an important role, they should be inculcated in the student curriculum. Meditation and yoga can contribute directly to improve mental focus and concentration among students. It involves long, deep, slow breathing, as well as the coordination of mental concentration. Yoga combines strength and flexibility exercises with relaxation and meditation. Studies have revealed that yoga has helped cure a wide range of mental and physical health problems, mainly among teens and children. If the present trend of lifestyle as mentioned above is again taken into consideration, it can be said that, in contrary to the olden times, Children these days, rarely involve themselves in sports and other similar aspects and are rather busy with smartphones, videogames and other static entertainment. Hence, Yoga and Meditation becomes a matter of Paramount importance in student life.

What is Yoga? Yoga in simple terms can be defined as a spiritual science of self-realization. The origin of Yoga dates back to over five thousand years in the Indian subcontinent. The Indian Sage ‘Patanjali’ defined Yoga as the process of Spiritual Development. In addition to this, he even came up with the different Postures, known as asanas and various Breathing Exercises, which are known as pranayama. He also defined the four limbs of meditative stages, as follows

If the present day situation is taken into account, it can be said that the concept of yoga has gained popularity in the western world due to the increasing awarness among peopel around the world and a need for balanced lifestyle. Another vital phenomenon to be taken into consideration is hatha yoga; hatha yoga has become quite popular among the westerns, it seeks to promote health and well-being through physical exercise. The regular practice of asanas and breathing exercises (pranayama) makes the body strong, supple and healthy.

Meditation can be defined as a practice where an individual uses a technique, such as focusing their mind on a particular object, thought or activity, to achieve a mentally clear and emotionally calm state, it basically means transforming the mind. Even the origin of meditation has a thing with India, as the sages here were profoundly known for their meditating skills. Various Hindu religions like Jainism, Buddhism, Sikhism give significance to yoga and follow it as a part of their religious practice. It encourages developing concentration, clarity, emotional positivity, and a calm seeing of the true nature of things. By engaging with a particular meditation practice you learn the patterns and habits of your mind, and the practice offers a means to cultivate new, more positive ways of being.

Significant Role of Yoga and Meditation in Student Life

Yoga and meditation if practised regularly may yield very good results among the student community, which can be fighting depression, anxiety etc. which would prove to be beneficial to the students in a long run. Yoga improves physical as well as mental health of an individual while meditation provides peace of mind and control over the body.

How can yoga work wonders for a Lawyer?

Whenever one tries to picture a lawyer, one is sure to imagine a person stiff-backed, wearing a suit and with a briefcase, and further, it is an accepted notion in the society that these are not the easy going people. But according to certain critics, yoga and law are said to make a tremendous combination and go hand in hand. The critics further add that yoga not only helps a person while pursuing law in terms of its studies but also during his professional life if the practice is continued, it would help that person develop professional skills and ethics which again acts as an added advantage and works in favour of the person’s professional lifestyle. Amongst the numerous benefits yoga offers a lawyer, a few of the significant ones are discussed under

In order to strive for excellence in the profession of law, it is extremely important for a lawyer to understand his clients better, and this sometimes requires a lawyer to read between the lines, and according to the critics’ yoga can provide and develop the sensitivity required for this. For example- If a client while communicating to his lawyer is sounding very emotional and is being deviated from the facts. It is very important for a lawyer to catch this at that moment and to be able to get the required facts from his client and this can be attained by the way of yoga.

The type of training a person undergoes as a lawyer requires both analytical thinking and problem-solving techniques at the same time. Yoga gives a boost to both these techniques by adding mindfulness to them. It finally allows a law student to engage in both aspects with a creative openness.

In the attainment of this particular feature, meditation helps a person better when compared to yoga. In order to accomplish this, a person is required to spend time meditating on a regular basis and involve himself in mindful practices. In addition to this, a person is also required to practice certain breathing techniques like that of deep breathe in, inhale and exhale, and all of them help in the overall development of a lawyer and his professional life.

This particular tactic of yoga comes in handy while there arises a problem, which can be anything related to a  legal professional. While a lawyer is approaching a problem, yoga helps to create a space and instead of rushing at things it enables a lawyer to sit back analyse a problem and further arrive at a solution in a judicious way.

The most important concept which yoga tries to instil in a person is mindfulness. It helps the person to be focussed in the work which he is doing at that time. This mindfulness helps a lawyer in building a serene environment around him and also to have a good interaction with judges, clients and co-workers. In a legal stream, it becomes very essential for one to think of the plans ahead of him and act accordingly and not to dwell on the past work and in order to ensure this is achieved in a lawyer, the concept of mindfulness becomes important for him to master.

The Sound of Silence

The concept of sound of silence was originally put forth by Buddha, by the way of introduction of the concept of ‘divine eye theory’. It was stated by Buddha that it is always easier to hear the sound during the night time when the surrounding is calm. Once, the person identifies the sound, he is required to give his complete attention to the sound and should continuously listen to it by giving all his concentration to the sound and keep his awareness there and he should further keep going into the sound.

Sound of silence is a concept which is associated with the silent meditation. While a person is meditating, as and when he calms down he experiences the sound of silence in his mind. Many who have experienced it try to explain that it is the sound of high frequency which is the sound of ringing bells. This sound is normally never noticed and a person can acknowledge this only after practising it for quite a lot of time. When the person begins to hear the sound, it is the sign of emptiness. The sound can further be said to be something that is engrossing, drags the attention of the person who is meditating. This sound additionally makes the person turn to it and makes the surroundings around him peaceful and blissful.

How important is the sound of silence among law students?

This practice can be remarkably helpful for the law students, as it helps in enhancing their skills and the onus of inculcating such aspects among the students at a very young age can prove to be greatly helpful as and how they grow up. Law students are considered to be the ones who are required to address the needs of the society in the future and are hence very much essential for the sake of smooth functioning of the society. For this very purpose imbibing the right values in them during their initial years in their courses becomes extremely significant.

A lawyer is required to have the right ethics while dealing with his clients as they are the ones who approach a lawyer for the sake of addressing their grievances and a lawyer is further expected to uphold the concept of equity. Collectively taking all this into consideration it can be said that by inculcating the concept of sound of silence among the students it would further add to their proper working in their profession and this would in a larger perspective add to the well-being of the society in large.

Throwing light on the Yoga Session conducted as a curriculum in the college, sharing my opinion about the same, I would like to say that the yoga nidra which was conducted as a part of the yoga session was extremely soothing and gave a very positive and good vibe. Further even the various other asanas and meditation practised during the session proved very helpful and it rather seemed like a good break from the academic pressure and a correct alternative or a correct measure to overcome the academic stress and anxiety as one would really feel content and peaceful after the conclusion of each session and in addition to it there was even ample of opportunity to gain the knowledge about various Meditative Practices, Asanas which can be used in the life even further. In Addition to all this the numerous simple exercises taught in the session if practised regularly would keep the body aches away, which are commonly seen amongst students because of their lifestyle, which can be like that of back pain in students as they tend to sit in the same place for longer period of time. And would hence prove to be healthy practices if inculcated in day to day life.

The Yogic and the Meditative practices are the ones which originated in India and they have proved to be of immense importance for the overall well-being of any individual, hence we as Indians have been blessed with such a gem of knowledge and should make use of it in the right way. Thus, it becomes a duty on our part to take this forward with us and make complete use of the same and not let it go. Numerous educational Institutions are these days becoming aware of the importance of Yoga and have started including them under their curriculum. These can be considered a great initiative and should be appreciated and carried forward.