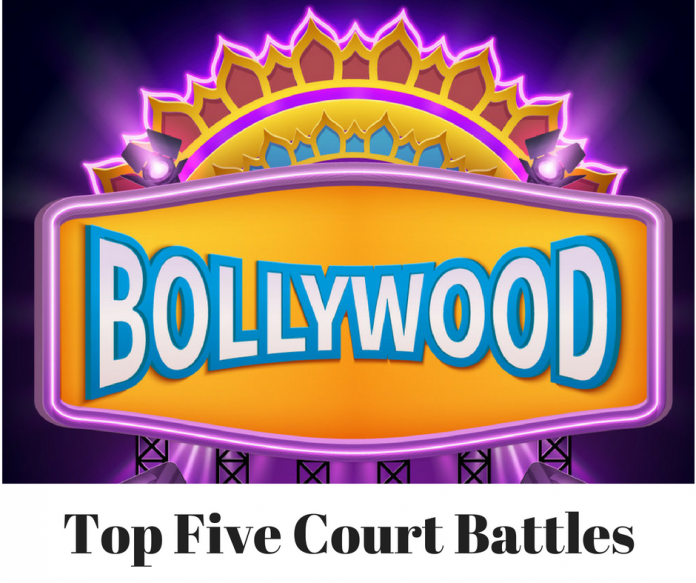 This article is written by Mohona Thakur, Team iPleaders.

Bollywood is quite often than not ‘inspired’ by Hollywood as well as South Indian movies and songs alike.

Let me give you an example. Remember Gauri Shinde’s coming of age drama, Dear Zindagi, starring Alia Bhat and Shah Rukh Khan? It turns out that it is said be inspired by a Canadian comedy-drama TV series called ‘Being Erica’. Was there any case filed against the producers of this film? No.

Do all disputes in Bollywood arise due to plagiarism? To a certain extent, but not entirely.

Plagiarism or as the writers would prefer calling it, ‘inspiration’ is one of the most rampant legal troubles that Bollywood is in the habit of facing in the recent times. Besides this, not only do they face suits from Hollywood for deceptively similar film titles (like in the case of Hari Puttar) but also closer home from the infamous censor board (such as Udta Punjab) and the very citizens of India (read Padmavat).

Indian cinema has no scarcity of films that may have courted a major controversy or in some cases faced a complete ban and were never released in the country. A number of films such as Mira Nair’s Kamasutra: The Tale of Love never released in India; Anurag Kashyap’s Black Friday which was based on the 1993 Mumbai blasts had to wait for three years before it could release as the Bombay High Court directed it to be released only after the trial was over.

Can you imagine the gravity of loss of business for the producers? This is one of the many reasons Bollywood production houses are in need of outstanding media lawyers who not only understand the law but also the needs of the business.

Let us take a look at a few of the Bollywood films that got into legal trouble and how they went about it:

It is the latest film to court controversy in India. Certain groups of the right wing felt that the movie misrepresents history and tarnishes the reputation of certain lawyers. There were death threats to both the director, Sanjay Leela Bhansali, and the lead actress, Deepika Padukone. States such as Rajasthan, Uttar Pradesh, Madhya Pradesh, Gujarat and Haryana had disallowed screening of the movie, even as it awaited the certificate from the certificate board.

The film was on the other hand not getting the required clearances from the Certificate Board. The apparent reason for the same was an incomplete application submitted by the filmmakers and the 68-day rule (one must submit the application to the film certification board at least 68 days before the release date).

Eventually, Viacom 18 through their firm, Naik Naik & Co., approached the Supreme Court against the notification of the above-mentioned states seeking stay of the same and permitting the release of the movie across India. The bench constituting the Chief Justice of India heard the matter and put a stay on notifications issued by the states. You can read more about the arguments advanced in this matter here.

The controversy surrounding the release of the Shahid Kapoor, Alia Bhat starrer Udta Punjab has been one of the longest that Bollywood has possibly seen. With the initial jolt coming in from the Certificate Board (CBFC) suggesting cuts across 13 categories to the protests across northern India and subsequently the batch of petitions filed in the Punjab and Haryana High Court alleging that the movie shows Punjab in bad light and promotes usage of drugs, Udta Punjab fought a long drawn battle.

The courts in India finally drew a close to the long controversy surrounding the release of the movie having decided that it does not contain anything objectionable in the film.

Twentieth Century Fox filed a case of copyright infringement against the makers of the movie Knockout claiming that it was a complete rip-off of their movie named ‘Phone Booth’. If you watch both the movies, you’d realise that the movies revolve around the same plot – a hostage in a phone booth having a conversation with the sniper and intervened by intruders during the conversation.

While the single bench stayed the release of the movie, the division bench reversed the stay order. Eventually, the parties came to an out of court settlement and Sohail Maklai, the producer of Knockout paid Fox an amount of 1.25 Crore.

This isn’t a one off case where inspiration went a notch up too high and took a turn towards infringement. In 2009, Twentieth Century Fox had filed a suit against BR Films for the movie ‘Banda Yeh Bindass Hai’ claiming that it was the copy of their film ‘My Cousin Vinny’. The case was settled out of court and BR Films had to pay up 1.3 Crores for it.

There are a number of other movies such as Partner, which was allegedly a copy of the Hollywood movie Hitch, Bang Bang which was clearly the Indian version of Knight and Day.

How does one decide whether it is an inspiration or an original work under the Copyright Act? I believe deep understanding of copyright law through various sources including reading up the law, case laws and engaging in courses on intellectual property and media laws shall be helpful.

Justice Khetrapal in his 26 page judgment very clearly enunciated that Warner Bros. sat over its rights for three years before they filed the case in 2008. The fact that the movie was going to be titled ‘Hari Puttar’ was in their knowledge since 2005 and they chose to only file a suit for injunction when the movie in question was about to reach the finishing line.

For those of you who do not know, it is a well-established principle that if the plaintiffs stood by knowingly and let the defendants build up their business or venture, then the plaintiffs would be estopped by their rights to claim equitable relief. This three year long unjustified waiting period is what caused Warner Bros. a favourable judgment!

Kunal Kohli’s movie Phir Se was stuck in a long legal battle for having lifted the script and story off an underproduction movie titled R.S.V.P. The writer Jyoti Kapoor and production house India Stories Media and Entertainment Pvt. Ltd. dragged Kohli to the court.

The Supreme Court, not completely convinced by the arguments advanced by Adv. Amit Sibal and Sr. Adv. Shyam Diwan for the production house and writer, allowed the movie to be released on the scheduled date. This was subject to the condition that Kunal Kohli pay a total compensation of Rs. 60 Lakhs and give due credit to the writer.

This case was seen as a huge win for the writers in the film industry as this acted as a sign that the screenwriters are very vigilant about their rights and are not scared of standing up and fighting against producers and directors at the risk of losing future assignments.

If you take a quick look at the court cases and litigation involving media and production houses, whether they are certification board issues, petitions filed by NGOs, etc., copyright infringements with respect to movies or songs, trademark infringement of movie titles, or plagiarism, you will notice that there is a rampant increase in them.

In the quest for finding not only good content, but content that will sell and make the production houses profitable, a lot of lines are unknowingly or knowingly crossed. With the increase in such litigation, it is best for not only the lawyers to be well-versed in media related laws and litigation but it is also necessary for the film fraternity to have knowledge about media and entertainment laws.

If you work for a media house or ad agency, consider sending someone from your legal as well as creative team for this media law course. If you are a media lawyer interested in this sort of work, or someone planning to get into the media and entertainment law business as a lawyer, do check this course out.