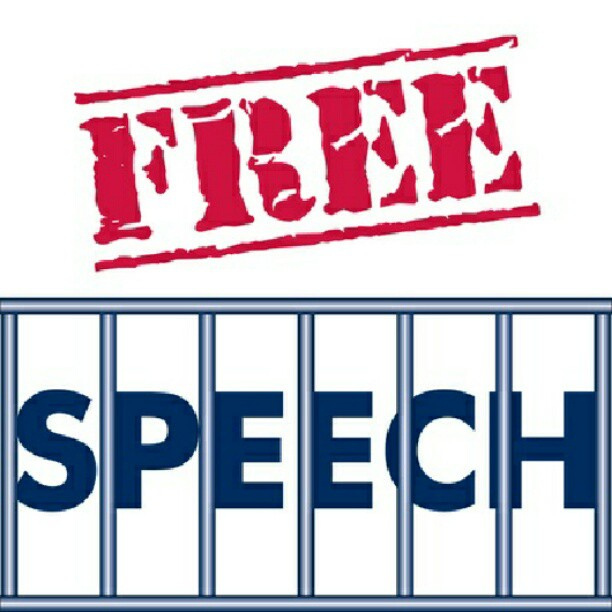 In this article, Shreya Rajan of The ICFAI University, Dehradun discusses Five most important judgments on freedom of speech and expression.

“If liberty means anything at all, it means the right to tell people what they do not want to hear” George Orwell

Freedom of speech and expression

The power or right to express one’s opinions without censorship, restraint, or legal penalty is known as Freedom of Speech.1 Unhindered flow of words in an open forum is the essence of free society and needs to be safeguarded at all times. One’s opinions may, therefore, be expressed by words of mouth, in writing, printing, pictures, or any other mode. This freedom includes a person’s right to propagate or publish the views of other people.2

In India, freedom of speech and expression is guaranteed under Article 19(1) (a) of the Constitution of India. Apart from this, provisions relating to freedom of speech and expression are also contained under various international conventions like Universal Declaration of Human Rights (UDHR), European Convention on Human Rights and Fundamental Freedoms, International Covenant on Civil and Political Rights, etc.

Freedom of speech and expression vis-a-vis Constitution of India

Freedom of speech and expression is one of the six fundamental rights conferred to the citizens of India under Part III of the Constitution. It is one of the most important aspects in the hierarchy of personal liberties provided under Article 19 to Article 22 of the Indian Constitution.

Article 19(1) (a) states that all citizens shall have the right to freedom of speech and expression. But this right is subject to limitations imposed under Article 19(2) which empowers the State to put ‘reasonable’ restriction on various grounds, namely, security of the State, friendly relations with foreign States, public order, decency and morality, contempt of court, defamation3, incitement of offence4, and integrity and sovereignty of India.

Purpose of Freedom of speech and expression

Freedom of speech and expression not only allows people to communicate their feelings, ideas, and opinions to others, rather it serves a broader purpose as well. These purposes can be classified into four:

Freedom of speech and expression of the press lays at the foundation of all democratic organizations, for without free political discussion no public education, so essential for the proper functioning of the popular government is possible.5

Freedom of speech also includes the right to silence. In a case6, three children belonging to Jehovah’s witnesses were expelled from the school for refusing to sing the national anthem, although they stood respectfully when the same was being sung. They challenged the validity of their expulsion before the Kerala High Court which upheld the expulsion as valid and on the ground that it was their fundamental duty to sing the national anthem. On appeal, the Supreme Court held that the students did not commit any offence under the Prevention of Insults to National Honour Act, 1971. Also, there was no law under which their fundamental right under Article 19(1) (a) could be curtailed.

Accordingly, it was held that the children’s expulsion from the school was a violation of their fundamental right under Article 19(1) (a), which also includes the freedom of silence.

Freedom of Speech and Sedition

The offence of sedition, in India, is defined under Section 124-A of the Indian Penal Code as, “whoever by words either spoken or written, or by signs, or by visible representation or otherwise brings into hatred or contempt or excite or attempts to excite disaffection towards the government established by law in India shall be punished”.

In the recent case of Kanhaiya Kumar v. State of Nct of Delhi7, students of Jawaharlal Nehru University organized an event on the Parliament attack convict Afzal Guru, who was hanged in 2013. The event was a protest through poetry, art, and music against the judicial killing of Afzal Guru. Allegations were made that the students in the protest were heard shouting anti-Indian slogans. A case therefore filed against several students on charges of offence under Sections [124-A, 120-B, and 34]8. The University’s Students Union president Kanhaiya Kumar was arrested after allegations of ‘anti-national’ sloganeering were made against him. Kanhaiya Kumar was released on bail by the Delhi High Court as the police investigation was still at nascent stage, and Kumar’s exact role in the protest was not clear.

Case Study on freedom of speech and expression

The validity of the Drug and Magic Remedies (Objectionable Advertisement) Act, which put restrictions on advertisement of drugs in certain cases and prohibited advertisements of drugs having magic qualities for curing diseases was challenged on the ground that the restriction on advertisement abridged the freedom. The Supreme Court held that an advertisement is no doubt a form of speech but every advertisement was held to be dealing with commerce or trade and not for propagating ideas.

Advertisement of prohibited drugs would, therefore, not fall within the scope of Article 19(1) (a).

In this case, public interest litigation (PIL) 11 was filed under Article 3212 of the Indian Constitution by PUCL, against the frequent cases of telephone tapping. The validity of Section 5(2)13 of The Indian Telegraph Act, 1885 was challenged. It was observed that “occurrence of public emergency” and “in the interest of public safety” is the sine qua non14 for the application of the provisions of Section 5(2). If any of these two conditions are not present, the government has no right to exercise its power under the said section.

Telephone tapping, therefore, violates Article 19(1) (a) unless it comes within the grounds of reasonable restrictions under Article 19(2).

The Court, in this case, observed that, Article 19 of the Indian Constitution does not use the phrase “freedom of press”16 in its language, but it is contained within Article 19(1) (a). There cannot be any interference with the freedom of press in the name of public interest. The purpose of the press is to enhance public interest by publishing facts and opinions, without which a democratic electorate cannot take responsible decisions.

It is, therefore, the primary duty of courts to uphold the freedom of press and invalidate all laws or administrative actions which interfere with it contrary to the constitutional mandate.17

Similarly, imposition of pre-censorship of a journal18, or prohibiting a newspaper from publishing its own views about any burning issue19 is a restriction on the liberty of the press.

The case is one of the firsts in which the issue of prior censorship of films under Article 19(2) came into consideration of the Supreme Court of India. Under the Cinematograph Act, 1952, films are divided into two categories- ‘U’ films for unrestricted exhibition, and ‘A’ films that can be shown to adults only. The petitioner’s film was refused the ‘U’ certificate, and he challenged the validity of censorship as violative of his fundamental right of freedom of speech and expression. He contended that no other form of speech and expression was subject to such prior restraint, and therefore, he demanded equality of treatment with such forms. The Court, however, held that motion pictures are able to stir emotions more deeply than any other form of art.

Hence, pre- censorship and classification of films between ‘U’ and ‘A’ was held to be valid and was justified under Article 19(2) of the Constitution.

In this case, the validity of the Newsprint Control Order was challenged. The Order fixed the maximum number of pages which a newspaper could publish, and this was said to be violative of Article 19(1) (a) of the Indian Constitution. The government raised the contention that fixing the newsprint would help in the growth of small newspapers as well as prevent monopoly in the trade. It also justified its order of reduction of page level on the ground that big dailies devote a very high percentage of space to advertisements, and therefore, the cut in pages will not affect them. The Court held the newsprint policy to be an unreasonable restriction, and observed that the policy abridged the petitioner’s right of freedom of speech and expression. The Court also held that the fixation of page limit will have a twofold effect- first, it will deprive the petitioners of their economic viability, and second, it will restrict the freedom of expression as compulsorily reducing the page limit will lead to reduction of circulation and area of coverage for news and views.

Hence, any restriction on the number of pages or fixation of page level of a newspaper invalid and violative of Article 19(1) (a).