In this Article, Apoorva Singh Vishnoi of RGNUL discusses the law on Municipal Solid Waste management in India.

India is the third largest producer of waste, specifically municipal solid waste (MSW), in the world[1] with 109,589 tons of waste per day[2]. It has disproportionately high urban waste generation rates per capita because of lack of proper MSW management infrastructure[3]. This country has long been familiar with woes brought by MSW and its substandard disposal. For example, in 1994, a plague broke out in Surat and was attributed to “uncollected solid waste blocking drains” by the official inquiry on its causes[4]. The infamous 2005 flood in Mumbai was also caused due to drains being blocked by plastic bags (its direct consequence being the introduction of Maharashtra Plastic Carry Bag Rules, 2006)[5]. One could find many other incidents and phenomenon which can be linked with the incompetence of civic bodies in MSW management[6].

But when it comes to waste management policy, we may as well as have been in Neolithic time. Until 2000, we didn’t even have any law concentrating on how to deal with MSW. Environmental related legislation such as Water (Prevention & Control of Pollution) Act, 1974, Air (Prevention and Control of Pollution) Act, 1981 and Environment Protection Act, 1986 was introduced but the subject of MSW was neglected legislatively. Certain rules like Hazardous Wastes (Management and Handling) Rules, 1989 and Biomedical Waste (Management and handling) Rules, 1998 dealt with the subject only tangentially. This glaring overlook was compounded by the cash-strapped status and general indifference of the civic bodies towards maintaining a functional MSW disposal system.

It was only after a writ petition, Almira Patel v. Union of India was filed before Supreme Court that the Central government swung into action and notified Municipal Solid Wastes (Management and Handling) Rules, 2000[8]rules under Section 5 of Environment Protection Act, 1986. These rules finally provided a uniform framework for the local authorities around the country on MSW management.

Before the ruling in Almira Patel, there existed some judgments touching upon this matter. In B.L. Wadhera v. Union of India and Ors.,[9] it was observed by the Supreme Court that “The capital of India is one of the most polluted cities in the world. The authorities, responsible for pollution control and environment protection, have not been able to provide the clean and healthy environment to the residents of Delhi.”

In another case, Municipal Council, Ratlam vs. Vardhichand[10] it was held that “it is not open for the municipalities to plead a lack of funds as a defense for not carrying out its duties. Indeed, a responsible Municipal Council constituted for precise purpose for preserving public health and providing better facilities cannot run away from its principal duty by pleading financial inability.”

But Almira Patel case was the first one that extensively dealt with the subject at such a level. By Supreme Court’s order of 1998, a Committee was formed “to look into all aspects of urban solid waste management”. On submission of its report, the Government came up with the 2000 MSW rules.

The Supreme Court in its 2000 judgment would rebuke various authorities for lack of initiative or inaction and give direction prohibiting accumulation of garbage or other polluted obnoxious matters, cleaning of public premises, ensuring proper and scientific disposal of waste, levying charges for littering etc.

The 2000 rules were applicable on “every municipal authority responsible for the collection, segregation, storage, transportation, processing, and disposal of municipal solid wastes”. It fixed certain responsibility for municipal authorities, State Governments, and UT Administrations as well as Central Pollution Control Board and the State Board or the Committees in infrastructure development, setting up landfills and other waste processing and disposal facilities, monitoring and ensuring eco-friendly compliance and submitting Annual Reports.

In this case, National Green Tribunal applied “principle of proportionality” based on the concept of balance was applied when a dispute arose on the location of MSW Management Project in Bareilly where there was a conflict between the need to build an MSW plant and the environmental and health concerns of the resident.

While the 2000 and 2016 rules deal with MSW generally, the following rules cover specific categories of waste that overlap with MSW:

These technical guidelines are given by CPCB and deal with various aspects of waste management:

Despite the existence of the better framework for MSW than in the 1990s, as a walk in any non-posh areas of any city will show you, garbage disposal continues to be a problem. While the 2016 Rules set some lofty goals, the delay in implementing the Rules within the time-frame set by them means that they might prove to be a sequel to the 2000 Rules in terms of the state of implementation and the common man will continue to grapple with heaps of garbage. The Rules do not provide for any complaint or grievance redressal system and a suffering party will have to approach the respective State Pollution Control Board or the NGT for deliverance. 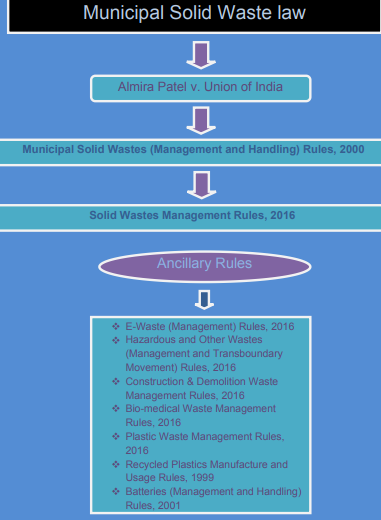