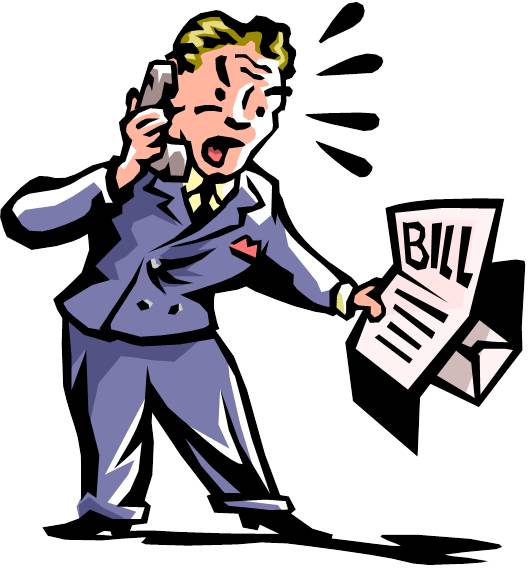 In this article, Apoorav Arya put forth the legal steps one can take if they are served a notice of non-payment of a disputed bill.

Despite not making much telephone calls, is your telephone bill sky high? Were you out of town and still, electricity bill is touching the sky? Having issues with your credit card bills? Are, the service providers overcharging you? What to do when you are overcharged for your telephone, electricity, water or any other bill. Here is a detailed solution to such problem of non-payment of dipsuted bill.

Matters relating non-payment of disputed bill will be covered under the provisions of Consumer Protection Act, as a bill amounts to either purchasing of some goods or availing of services. Therefore, one can approach the consumer forum in such cases. A detailed procedure of proceeding in Consumer forum followed with case study on nonpayment of disputed telephone and electricity bill.

Approaching the Consumer Court on non-payment of disputed bill

For this purpose one should consult a lawyer as it would be more effective rather than drafting on your own. Here are few key points which must be in your draft complaint:

Introduction: Introducing yourself in 2-3 lines.

Defect: In this complain about the deficiency in the services, in the above cases, deficiency of services arising out of excessive bill.

Rectification: In this complainant should rectify what steps were taken by him to redress the matter before approaching the court. Example could be, approaching the electricity  board several time, informing them about the defects over phone and letters, etc.

Jurisdiction: Here is where a lawyer will come handy. If complaint is made to court with no jurisdiction over the matter, complaint will outrightly get rejected.

Relief claimed: It is here all the relief which one wants as a compensation should be mentioned. An example could be, settlement on disputed electric bill. Along with this, one should always demand for litigation expenses incurred while fighting the matter in the court as a relief.

One can argue the case on their own or may hire a lawyer. If one is arguing on their own, here are few points to be kept in mind-

Dress code → Person arguing must not necessarily be in lawyer’s attire. Decent formal dressing will suffice the situation.

What will be the complainant called in the court →  A complainant will be referred to as Consumer Complaint (C.C.) and

After result → Free certified copy will be given to the litigants.

Within how many days should a complaint be filed in the consumer forum?

The complaint must be filed within two years from the date of receipt services availed. If the limitation time has exceeded then an additional time might be granted on providing with sufficient reason which will be subject to the understanding of the court.

What to do If you get a notice of non- payment of disputed telephone bill?

Regional offices of Telecom Regulatory Authority, are filled with such complaints. The dimensions of the problem can be calculated from the fact that the problem of excess billing even had its echo in the Parliament of the country. On 31st March, 1987 there was a complaint in the Parliament that even the Members of Parliament were subject to excess billing. It was alleged that when they were out of station their phone bills in Delhi went up.

In general excess billing complaints arise from telephone having STD facility. They arise because of-

What to do when the telephone bill is unreasonably high

Then onus of proving that bills are not exorbitantly high is on the telephone service provider. The meter can record exorbitantly high number of calls even without the subscriber making any such calls due to technical fault.

When can a subscriber be called a defaulter? Whether telephone connection can be disconnected for alleged non-payment of a bill?

The power of disconnection of telephone is a very drastic power and it should not be exercised lightly. It should not be forgotten that telephone service is one of the most essential services today and disconnection thereof may put a citizen to extreme hardship and inconvenience and cause irreparable harm and injury. It may have far-reaching ramifications on his day to day living as well as on his means of livelihood.

What to do when findings of the Telecom service provider still sounds unreasonable to you?

In such cases, one can approach the court. The Telecom Disputes Settlement and Appellate Tribunal (TDSAT), adjudicate disputes and dispose of appeals with a view to protect the interests of service providers and consumers of the telecom sector and to promote and ensure orderly growth of the telecom sector.

What to do If you get a notice of non-payment of disputed electricity bill?

In these following cases, electricity service provider might disconnect an electric connection-

There are situations where electricity bills are exhorbitantly high. Situations where homes are locked for months but still bill is excessively high is often.

Before taking any legal step, assure these things

These are prime reason for outstanding high electric bill.

Step1 Before starting anything, one must go and lodge a formal complaint with the local electricity board office about the issue. Chances are, most probably things will get resolved at this stage only. When matter over the disputed bill is not resolved and the notice stays, approaching court is the right decision.

Step3 Under matters related with electricity services, courts jurisdiction is barred. No one can go directly to court. (There are certain exception where one may file for an injunction as done in step2)

Step4 An assessing officer of State electricity board looks into these matters. Aggrieved person is entitled to file objections against the provisional assessment before the assessing officer, who will, after affording a reasonable opportunity of hearing to such person, pass a final order of assessment within thirty days from the date of service of such order of provisional assessment, of the electricity charges payable by such person.

Step5 After hearing the party if the assessing officer still thinks the party is guilty of such unauthorised use, then an extra tariff for those 30 days will be charged.

Step6 Aggrieved after the final order can appeal to State Commission.