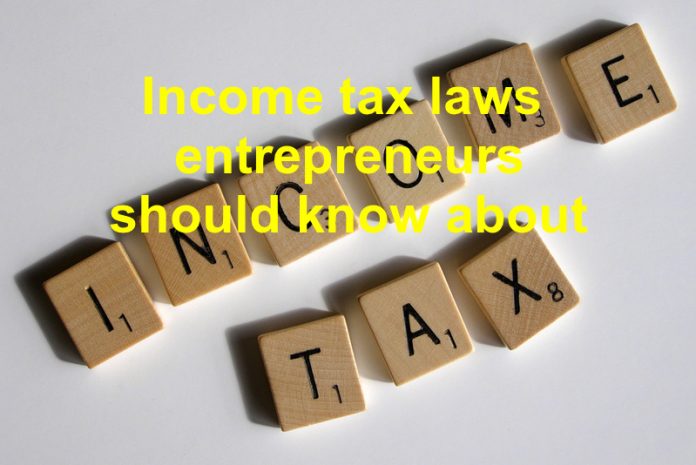 In this article, Aashish Ahuja, a student of B.A.LL.B. Hon’s at University Institute of Legal Studies, Shimla, Himachal Pradesh University discusses legal provisions relating to income tax laws which every entrepreneur should know about

Income tax can be defined as an annual charge which is levied on both earned income i.e. wages, salaries, and commission as well as unearned income i.e. dividends, interests, rents, etc. The two basic types are as follows:

Thus, for three initial years, the profits of a startup are exempted from the income tax to facilitate their growth and development and given them a competitive platform.

The income tax rules prescribe the procedures, time limits, conditions and return form, etc. for implementation of various provisions of the act.

Income tax return is considered as the most authentic proof of the income earned. In India, there is a system of self-declaration, wherein one is required to file income tax returns within the due date showing the income details, but due to some reasons, many people do not file tax returns because of the following reasons:

The different tax forms available for filing of tax returns

This form is used by the individuals who conduct a business or who earn through a profession and applies to any business, undertaking or profession on no limit of the income earned. The taxpayers can also club any income from salaries, speculation, lotteries, housing properties, etc. with the income earned from business.

The form is also known as ‘Sugam’ form and can be used by the individuals who earn their income from any business. This form is used in special circumstances and applies to businesses where income earned is based on the presumptive method of calculation.

Long-term capital gain is taxable at 20% along with surcharge and education cess.

Short-term capital gain is taxable at 15% along with surcharge and education cess if securities transaction tax is not applicable.

One needs to fill ITR form 2 as it declares the income from capital gains, all house properties, and other sources. (Including lottery)

Most of the businesses in the country are labour intensive, and the wages of the unorganized labour are generally paid in cash. Improper recording of payments results in higher profits as a consequence of under-recording of expenses and results in higher amount of taxes. A proper register should be maintained along with the cash receipts to avoid extra taxes.

Tax which is deducted at source is deducted from an individual’s income on a periodical basis and is applicable to income which is either regular or irregular. Income Tax Act, 1961 regulates TDS in India through Central Board of Direct Taxes under Indian Revenue Services. It is applicable for salary, commission, interest, rent, professional fees, etc.

MAT stands for “Minimum Alternate Tax.” This concept was introduced for companies, and it has been made applicable to all other taxpayers in the form of AMT (Alternate Minimum Tax).

Period for which MAT credit can be carried forward

Limited Liability Partnership is a new type of business entity in India. The income of the LLPs is taxed at the rate of 30%. The taxation policy of an LLP is similar to that of partnership firm. The income of a partnership firm is taxed at the rate of 30% plus 2% education cess and 1% secondary and higher education cess, which is similar to that of private limited company.

A private limited company can be defined as a voluntary association of persons of not less than two and not more than fifty members, whose liability is limited and the transfer of whose shares is limited to its members and the general public is not invited to subscribe to its shares or debentures.

A company is liable to pay tax on the income of the corporate. The income tax is levied on the private limited company at the rate of 30%.

A transfer price is defined as the price at which the divisions of a company transact with each other, such as the trade of supplies or labour within departments. These prices are used when individual entities of a larger multi-entity firm are treated and measured as separate run entities.

TDS stand for ‘Tax Deducted at Source.’ It is a type of tax which is deducted from an individual’s income on a periodical basis and can be applicable to income that is regular as well as irregular in nature. TDS is regulated by Income Tax Act, 1961 through Central Board of Direct Taxes under the Indian Revenue Services and directs the employer to deduct a certain amount of tax before making full payment to the receiver. It is applicable for salary, commission, professional fees, etc.

Any source which withholds a small percentage of overall payment while making payments is known as deductor. A person whose payment is deducted is known as deductee. For example, when a deductor is an employer paying salary to the employee who is a deductee.

When TDS is not deducted

On payments made to the Reserve Bank of India, the Government of India, etc. TDS is not collected. TDS will not be collected when interest is credited or paid to:

Tax Audit means a close examination of a tax return by internal revenue system to verify that the income and deductions are accurate. The taxpayers have to get the audit of accounts of their business or profession according to the provisions of income tax law.

Section 44AB of the Income Tax Act, 1961 covers the provisions of tax audits in India. According to the requirement of this section, an audit of accounts of the taxpayer is done by chartered accountant. The chartered accountant prepares the audit report and submits his findings.

Who should get their books audited

As per section 44AB, a person has to get his books of accounts audited by chartered accountant if he satisfies the following conditions:

Speculation is considered as an act of trading in an asset or conducting a financial transaction that has a significant risk of losing most or all of the initial outlay with the expectation of a substantial gain.

Intra-day trading means trading of shares within the same day. Delivery is not taken in such trading and thus, are said to be speculative transactions. The shares enter and exit on the same day from the trading account and does not enter DEMAT account at all.

It is vital to discuss with your tax accountant or attorney, no matter which legal form you choose, to make sure that you are operating legally and getting the best deal on your taxes. Thus, the statute of income tax in India is the Income Tax Act, 1961 and provides for levy, administration, collection and recovery of income tax.

Hope the article added value to your knowledge. Feel free to share more such unique provisions of income tax laws by commenting below and don’t forget to share.

How Is Agricultural Income Taxed?