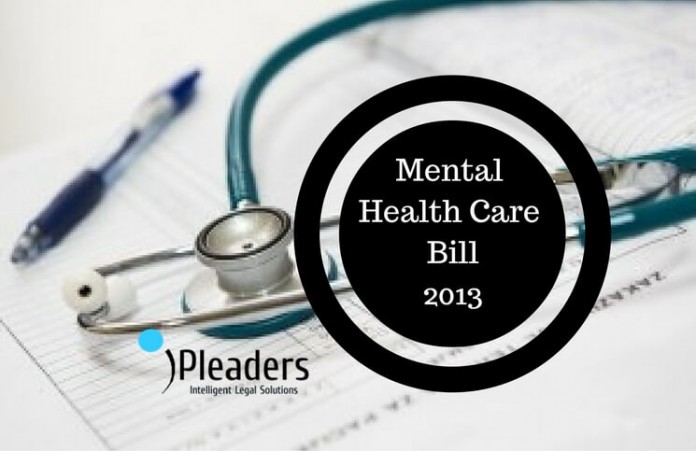 This Article “Here’s All You Need To Know About Mental Health Care Bill 2013” is written by Ishita Mehta.

Through the recent studies it has been understood that there will be a constant increase with respect to mental illness in India. Down-the-line, Mental Health Care Bill 2013 focuses on curbing the Mental illness.

Mental illness is a form of disability which distinguish from a normal behavior pattern. Mental issue or emotional instability is an automatic mental or behavioral example that happens in an individual and is thought to bring about misery or handicap that is not expected as a feature of ordinary advancement or well being.

The Mental Health Care bill was passed in 2013 by the Rajya Sabha. The bill focuses on everyone’s right to access mental health care and facilities related to it. The bill replaces the Mental Health Act 1987. This was done in favor of the people who are mentally ill so that there can be better health services provided to these people. This bill was introduced because the existing bill was not able to fulfill the right to person with mental illness.

Every mentally ill person has the privilege to-

The provision which should incur most noteworthy harm to the arrangement of emotional well-being consideration conveyance, is the provision of bringing all the general hospital psychiatry unit inside the ambit of mental health establishments.

So far, as the improvement of psychiatry and psychological well-being consideration in our nation is concerned, it will bring about moving the clock in reverse.

Under the Mental Health Act 1987, there was no mention of any general hospital or nursery home which provides for psychiatric services under the definition of psychiatric hospital. Henceforth, they were restrained from obtaining a licence under the act. But, the new amended bill includes all the general psychiatry bills.

Unmodified ECT (Electroconvulsive therapy) has been banned and ECT to minors can be given only after approval from the Mental Health Review Board.

The Government has planned a whole procedure to create awareness for the prevention of mental illness and to promote awareness related to mental health programs in India. The Provision of the Act are given wide exposure through open media. Government authorities including police and different officers are given training to deal with the issues present in the Act.

Human rights related to the people suffering from mental illness are of utter importance. Even under the Constitution of India every person has the right to live with dignity and freedom.

Electroconvulsive therapy is a procedure to determine seizure by giving small electric currents. It is often referred to as shock treatment.

This therapy has been banned based on the sentimental level and not based on the scientific level. This ban has stopped the usage of ECT in most of the parts and restrictions have also been regulated on the use of this therapy on a minor.

Unmodified ECT has been subject to scrutiny by human rights network .

Rights Of A Person With Mental Illness

The preamble of India ensures equal treatment to all the citizens.

The mentally ill person should be allowed to take his own decision irrespective of his mental health and conditions. He can communicate through talking or any kind of sign language if he wants to get the treatment done or not get it done.

Looking into this matter, we also have NR ( Nominated Representative )–

Patients have the right to get complete information about their treatment. For poor section of mentally ill person, free treatment is also allowed and given consideration. There should not be any social stigma and they should avail all the hygienic facilities.

Must Read: Rights given to the Mentally disabled in India

Other Initiatives Of The Mental Health Care Bill 2013

According to Section 309 of the Indian penal code,if any person commits suicide, he will be charged for trial except when the person is mentally ill at the time of committing the suicide.

The Government is focusing on reducing the number of suicide deaths due to depression.

There have been a lot of cases where spouses ask for divorce on the basis of mental illness. This modification in the bill is raised as it is not valid to grant divorce in reference of person’s current mental health.

Under the Insurance regulatory development act ( IRDA), all the insurance companies are entitled to make provisions for medical insurance on the same basis as of physical illness. This is done to get mental illness under the ambit of health insurance.

Minors are always to be given special importance under this act. The guardians of the minors are their nominated representatives.

There have been a lot of instances where mental illness was not accepted by the society. The Mental Health Care bill 2013 has taken an initiative to restore the lost dignity of the mentally ill. Lots of measures will be taken in the future to include the mental illness come under the ambit of health issue.

This bill can ensure that everyone is treated equally, irrespective of any kind of illness, and no discrimination is done on the basis of this. Soon an effective legislation should be made to implement the bill more widely.

That’s all about Mental Health Care Bill 2013 for now.

How do you think The Mental Health Care Bill 2013 will influence the health sector & the Mentally ill?  Drop your views in the comments box below.