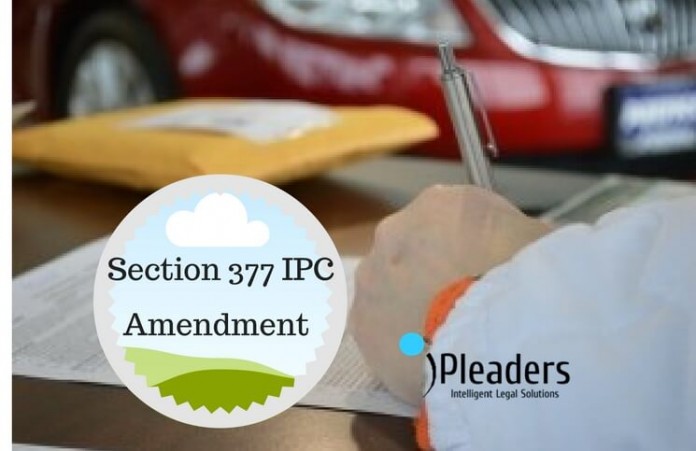 This Article “why amendment of section 377 IPC is must” is written by Ishita Mehta.

The petition was filed by Naz foundation to include the homosexuals in the society and to remove the brutal law that was still going on. A Lot of social activists have stated that this law is cruel and should be struck down.

The main idea behind the starting of this petition was to enhance every gender of the society and make them inclusive in nature.

India has a commitment to provide democratic right to each and every citizen and the decriminalization to the section 377 IPC leads to the breach of enhancement of the rights of the citizen. There have been constant news in the past years where the police has arrested LGBT people- leading to more harassment, threatening and extortion.

Though the high court struck down the plea of making section 377 IPC illegal in nature, it had also open public stage .

The main question which has come up is- how can we separate the issue of sexuality from other democratic struggles in India?

Key Highlights Of The Section 377 IPC

The section 377 IPC has become an issue related to the different interpretations.

The section 377 IPC enabled and encouraged the police to harass the homosexuals and exploit them in a certain way where, it led to the breach of their fundamental rights to live with dignity. But, the implication of unnatural intercourse also involves most cases of child abuse. There were a lot of child victims who were sexually abused and it was noted that a lot of cases were not related to the issue of the same gender sexual activities.

In the year 2016, the Supreme court is opening the debate again on this issue. Section 377 IPC in simpler words says, that-

But, it has its very own loophole i.e. it violates the basic human right of every citizen. Since so many years, the LGBT community has been raising its voice against this particular section.

This section not only deals with the problem for people who are homosexual in nature but it also adds up the problem for the sex workers in our nation. India is a progressive country but due to the backward thoughts of some sections of the society, it is adding more problems.

But, there is always a ray of hope as more and more people are coming up together against the decriminalization of Section 377 IPC, which led to opening up of the debate of this issue again. There are lot of petitions that have been filed and they raised a very significant question that’s necessary to be answered.

The debate mainly concerns that the law regarding Section 377 IPC  was brought in force in the year 1860 and since India is a progressive society, we need to change and amend the law on the basis of the present generation.

There is no room for the court to jump into the bedroom or into the privacy of any person.

Section 377 IPC debate has managed to unite most of the sections of the society. It has also managed to question the system of the judiciary and the courts as the people of India thought that they were going in a wrong direction. It’s been nearly 150 years since the section has come out and there has been no amendment done since that time.

Does this show that India is a progressive country?

It’s high time to consider that s 377 can be amended as more and more people are coming out of their closet and are finally willing to lead good and healthy lives with dignity and to protect themselves from any wrongful act being done.

There has to be a new law and regulation in the society for the transgenders and the LGBT community. There needs to be a change in the mindset of the government and other members of the society who are still in the social stigma that only a man and woman can have sexual act between them and everything else is unnatural.

Its high time when the whole nation comes to realize that millions of people have different sexual preferences.

A change is required with the political views as they are following such an old law which strikes down the whole idea and foundation of India being a progressive country.

Suggestive Reading:
Constitutional validity and right to privacy in India.

Homosexuality and the law in India.

What Should People Know?

The law has not changed regarding Section 377 IPC.

Section 377 still prohibits the sexual intercourse between the same gender. There will be a five judge bench hearing but, the date is not set yet. An order of admission will come. Public debate has also been re-opened. So, now there will be more viewpoints of the public regarding this issue .

If the judges agree with the curative petition, the government will definitely take a stand on it and might amend the laws regarding the applicability of the s 377.

Section 377 gives permission to the government to enter into a person’s private sexual activities so that, a straight person should also be concerned about this section. If s 377 is allowed there is a lot of possibility for absurd laws to pass also.

It’s not about the validity of the section, it is basically about how much will we as a nation hold on to s 377.

As earlier due to the implication on the srction 377, police used to harass and exploit the LGBT community. A good part about this section now is that they have implicated that if there is any harassment done, it will lead to misuse of the law.

Section 377 does not say that someone can get arrested just by saying he is gay, lesbian or a transgender. Just saying it does not mean it’s true. The person needs to have strict material evidences to show that he or she is a homosexual.

Arrest requires a lot more than just saying. It requires medical evidences that’re ought to be valid. If the intercourse does not allow penile-vaginal intercourse, it will be criminalized irrespective of the person being homosexual or straight.

Article 14 states that there should be equal protection given to every citizen on the basis of law.

It is assured that Section 377 IPC is violative of Article 14 as it is not competent on the part of the state to invade a person’s private life.

Right to privacy is a necessity for every person and this right cannot be hindered just because it is seemed to be against the social morality. Regarding section 377, it has 2 main objectives stated by both Union of India and the legislation.

Do Read: Can a wife file a case for unnatural sexual offences against the husband?

Article 21 states that every person has the right to live with dignity and without any hindrance in their personal space.

Section 377 denies a person’s right to live with dignity. It also breaches a person’s identity just on the basis of his or her sexual preferences.

We are living in the 21st century where each and every day there have been some progressions done and there is still a law which denies and violates the basic fundamental and human right of the citizens.

I believe that nobody is allowed to earn harassment or non equal treatment just on the basis of their different sexual preferences. What a man does in his own private room is none of anyone’s concern and the state should not hinder with their right to live with dignity and without discrimination.

India being a progressive country is so much capable of this change and with the right mindset, this change can begin as soon as possible, if we enforce it.

If we engage in amending the section, it will be beneficial for the homosexuals to come out of their closet and live their lives with dignity and by not getting overshadowed. They can be provided with more job opportunities, the employment growth will be raised too.

Sexual orientation is something which the people cannot choose, it is just within them and it is totally violative that they are not been treated rightly just because of something they did not choose. It is not a mental disorder,it is just something from within the person that needs to be taken to a positive level to provide more harmony within our country.

This’s all about Section 377 IPC for now. What do you think about the amendment of Section 377 IPC? Should it be done? Write to us know in the comments section below.